Castles in Ayrshire
Enjoy a great family day out!

Scotland is steeped in history and there is no better way of soaking up some of this heritage than by visiting one of the many castles in Ayrshire. In the latest in our series of holiday guides we take a look at just some of these impressive structures, which are located only a short distance from our holiday park in Scotland

Did you know that there’s an estimated 3,000 castles in Scotland? That’s one for every 100 square miles. Chances are that no matter where you are in this magnificent country you’re never too far away from a castle.

And our region is now different, with dozens of castles in Ayrshire just waiting to be explored. Our caravan park is handily located close to some of the county’s finest. Here we take a look at just a few of our favourites nearby… 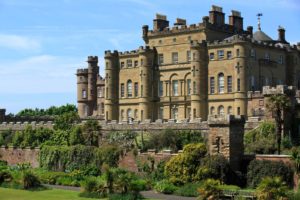 We can’t really start a blog about castles in Ayrshire without kicking off with the mightily impressive Culzean Castle. Cared for by the National Trust For Scotland, the castle is perched on the Ayrshire cliffs and is home to gardens, beaches, woods, trails and even an adventure playground.

Designed by Robert Adam in the late 18th century, the castle is filled to the turrets with treasures that tell the stories of the people who lived here. Inside you’ll find a fine collection of paintings and furniture. A great family day out – and only 7 miles away from our park.

Dating back nearly 700 years, Dundonald is one of the finest castles in Ayrshire and a splendid example of a Medieval tower house, with a barrel-vaulted ceiling in the lower hall.

With a hilltop location, the castle commands fine views over the Firth of Clyde. Inside you can explore the high-vaulted halls and gloomy dungeons of this splendid stronghold. The main tower was built in the 1370s by King Robert II to mark his succession to the throne.

Despite having been a ruin for over 300 years, Dunure Castle is still a mightily impressive sight. It was once the main fortress of the powerful Kennedy Family, the Earls of Cassilis.

It is just four miles down the coast from the impressive Culzean Castle but, for centuries, Dunure was the much more important of the two. It is believed the castle’s origins date back to the 1200s when a stone keep was built on the rocky outcrop overlooking the Firth of Clyde.

Blairquhan Castle is set in over 200 acres of private woodland and beautiful gardens and is now seen as an exclusive venue for weddings, parties and corporate events.

It dates back to the 14th Century and the original tower house and castle was built for the McWhirter’s, passed to the Kennedy’s through marriage, was acquired by the Whiteford’s, then sold to Sir David Hunter Blair in 1798. The Hunter Blair’s had the new castellated mansion built in the 1820s.

Find out more
Published on: 30 April, 2019
Previous Article:
Let’s visit Ayr
Next Article:
Eating out guide – where to dine out in Ayrshire
Start your holiday adventure
CALL TO BOOK 01655 331288
CHECK PRICES
& BOOK ONLINE
QUESTIONS
& ANSWERS
Close
Find your holiday
We use cookies to ensure that we give you the best experience on our website. If you continue to use this site we will assume that you are happy with it. View Privacy PolicyOkay